How have all of you been doing? My apologies for being away for so long but I had to step away just to come back STRONGER! In my absense I have actually been working very hard. I am now a self published author and my book is titled "The GPS Success Guide". It is 136 pages of pure empowerment for a prosperous life.

Author Calvin L. Lewis from DreamChasers Worldwide Inc. (GA.) says:
"I have read quite a bit and this… Continue

The same God that gave us commandments such as "Do not commit adultery, do not murder" said, "Do not worry." It's a violation of our relationship to God to question His authority by worrying.
Has any good ever come out of any worrying that we've ever done? Worry only compartmentalizes us andmakes us unable to do what we set out to do. If we are worried about a problem, what we need to do is simply trust the Lord and do good.
The word worry comes from a word that means "to divide."… Continue

There is much talk of the upcoming pagan festival

Before coming to UK I had not heard of Halloween but it did not take me long after arriving in the Uk even though I was a mere child to realise that people who participate in this celebration was giving importance to the Devil. It is so sad to see so many people who may claim not to celebrate but who indirectly give importance to the devil by allowing their children to partake in this devilish celebration then we as a nation sit and wonder what is happening to the children of… Continue

I GOTTA STORY TO TELL!!!
ONE DAY A DAD COMES HOME DRUNK AND MAD. HE PULLS OUT A GUN AND SHOOTS HIS WIFE AND THEN TURNS THE GUN ON HIMSELF.HIS LITTLE GIRL SITS BEHIND THE COUCH CRYING. THE POLICE CAME AND TOOK THE LITTLE GIRL TO A NEW FAMILY. HER FIRST DAY TO SUNDAY SCHOOL SHE WALKS TO THE BUILDING AND SEES A PICTURE OF JESUS ON THE CROSS. THE LITTLE GIRL ASKS THE TEACHER: how did that man get off the cross? THE TEACHER REPLIED: he never did. THE LITTLE GIRL ARGUED: yes he did when mommy… Continue

A SONG OF TRUST IN GOD & A PRAYER IN TROUBLED TIMES

Psalm 27 & Psalm 28
David sought to be close to God. He asked God for instruction and waited patiently for God to act. God sustained, protected, helped, and taught him.
Recognize that only God can assist when we stand helpless.
Waiting certainly plays an enormous role in the unfolding story of God's relationship to man. It is God's oft-repeated way of teaching us that His power is real and that He can answer our prayers without interference and manipulation from us.
But… Continue

LAY ASIDE EVERY WEIGHT

So how do we run our race in such a way that God's plan will be fulfilled in our lives and Heaven will rejoice? Hebrews 12:1 "Therefore we also, since we are surrounded by so great a cloud of witnesses, let us lay aside every weight, and the sin which so easily ensnares us, and let us run with endurance the race that is set before us."
Think about the way a runner dresses in an actual Olympic race. He doesn't run with an overcoat on, does he? And he… Continue 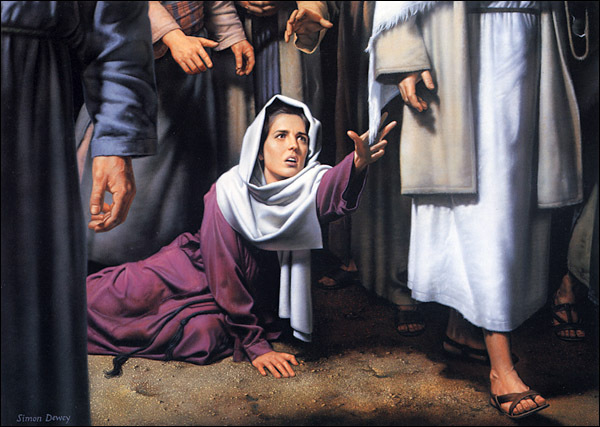 Beginning in Mark 5:25 is the story of the woman with an issue of blood. She didn't have this flow of blood for ten minutes. No, she had been sick with this flow of blood for twelve, long years, this woman had been putting up with this mess. The Scriptures in verse 26 puts it this way. "And who had endured much suffering under [the hands of] many physicans and had spent all that she had, and was no better but instead grew worse."
It goes on to… Continue

That's What I Do

We need to help get this out to everyone. Pass it on. Blessings!

YOU ARE GOD ALONE

How many people am I

Sometimes we don't know how to wait, or we don't wait too well. Paul and Silas knew how to wait well. In Acts 16:22, the Scriptures tell us that a crowd attacked them and that the rulers tore off their clothes and commanded that they be beaten with rods and struck with many blows. Afterward, they were thrown into prison, and the jailer was charged to keep them safely.
So there they were sitting in this prison all beaten up with their clothes torn off of them. Verse 24 tells us that the… Continue

PLEASE PRAY THIS 19 WORDS PRAYER AND BE BLESSED AND PASS THIS PRAYER TO ALL YOUR FRIENDS.


GOD OUR FATHER,
WALK THROUGH MY HOUSE
AND TAKE AWAY ALL MY WORRIES AND ILLNESSES; AND PLEASE WATCH OVER AND HEAL MY FAMILY
IN JESUS ' NAME. AMEN

HOW LONG SHOULD YOU WAIT?

Acts 1:13 "And when they had entered [the city], they mounted [the stairs] to the upper room where they were [indefinitely] staying....Peter and John and James and Andrew; Philip and Thomas, Bartholomew and Matthew; James son of Alphaeus and Simon the Zealot, and Judas [son] of James.
All of these with their minds in full agreement devoted themselves steadfastly to prayer, [waiting together] with the women and Mary the mother of Jesus, and with His brothers. Amplified