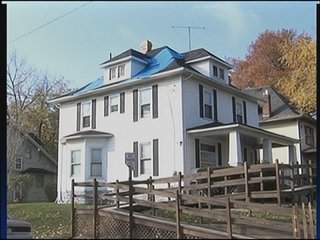 She planned on living out the rest of her life in her home until a windstorm in June threatened that idea. The storm demolished parts of the roof, and ultimately the roof in her bedroom completely caved in.

While Spaulding was forced to relocate to a nursing home, she was able to make use of an assistance program through the city of Lima to have her roof repaired. It appeared her prayers had been answered, but shoddy craftsmanship has put Spaulding in the position of again having no home.

The roof has begun to leak, with several spots visible at first glance. Spaulding’s daughter pointed out four spots in the home where dampness has already caused damage. Felecia approached the City Council at an October meeting and asked them to again help because the work had not been completed correctly. However, the family received notice that the city would not return to repair the roof.

“It is a good program that gives people some help they need,” Councilman Derry Glenn said. “However, these projects are being given to the low bidder without recognition of their work. We need to hold these companies doing the work responsible for what they are doing.”

Glenn said the program is funded through Community Development Block Grants. He said many of the companies are just rushing in and doing the jobs without doing them correctly. When the council rejected the request to fix the damage, he said he took over the cause on his own and is now asking for community members to donate their time and materials to help finish the work correctly so Spaulding and her daughter can stay in their home.

“We aren’t looking for money,” Glenn said. “We are just looking for citizens that are interested in helping their neighbor. Anyone that can donate their time to help work, or materials to help fix it properly.”

Spaulding said the fear of losing her home has taken its spell on her at her age.

“It’s worried me a lot,” she said. “I had a sick spell here recently because of all the worrying causing me some stress.”

Felecia said Spaulding’s stress medication had to be increased because of the problem.

Glenn said one of his concerns is the waste of taxpayer funds.

“It is city funding that is doing this,” Glenn said. “A lot of people that have had projects like this completed at their homes are having the same problems. For now, we are asking for people to come out and show some community pride and help out.”